H&M’s weekly sales figures show that is slowly starting to recover from the peak of the COVID-19 pandemic in China but there has clearly not been an immediate bounceback. Retailers must therefore consider their store reopening schedule post isolation measures, and whether consumer demand post peak-pandemic will be sufficient to support the cost of operating all stores straight away, says GlobalData, a leading data and analytics company.

Honor Strachan, Principal Analyst at GlobalData, comments: “H&M’s performance in China paints a harsh reality for what is to come across much of the world’s major retail markets, with the US, Spain, Italy, Germany, France, Iran, the UK and Turkey now having the highest number of confirmed coronavirus cases (excluding China) leading to significant slumps in consumer spend on fashion. Moreover, H&M operates in a winning segment of the apparel market, it has the scale to negotiate with suppliers, it has a strong physical portfolio where many stores are new or have been modernised, and stores operate in core retail locations – making its recovery more advantageous than many of its rivals, especially smaller domestic chains.” 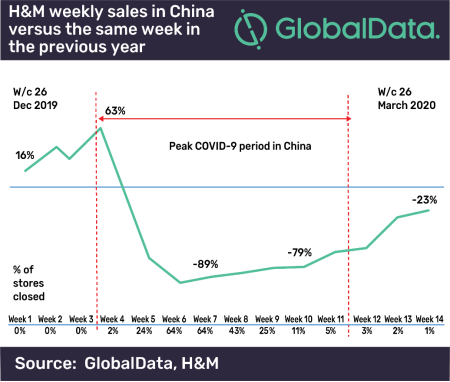 Retailers must start planning a recovery strategy for each country they operate in, taking into account consumer sentiment and confidence, the country’s financial stability, consumer propensity to spend on fashion, online penetration and the time in the season and promotional calendar – all of these factors will impact how and when physical stores should reopen.

Strachan continues: “Looking at H&M’s results in China, sales were down 79% in week 10 despite 89% of its stores in the country being open, raising the question whether this is a financially viable strategy in other affected markets due to the burden on operating costs. Understandably retailers will be keen to reopen stores to clear seasonal stock and recover lost revenue, but the impact to profitability by opening these stores too early could be severe.”

In markets where the government is offering support to retailers (such as in the UK where the government has suspended business rates, removed landlords’ rights to take back shops for non-payment of rent, and provided income support to consumers who have been furloughed for set periods), it may be in the retailer’s interest to keep staff out of work until consumer willingness to spend on non-essentials returns and footfall picks up.

Strachan concludes: “Understandably flagship and tier one stores will be a priority to reopen as soon as possible, but retailers must consider what their neighbours are doing in each location as trading from under-occupied high streets or shopping centres will impede traffic and draw out the recovery period. In China nearly all retailers have now reopened stores, but consumer propensity to spend is significantly higher than in mature retail markets such as the US and much of western Europe so we expect store reopening schedules and the recovery process to be longer than what we have witnessed in China.”